Australian writer Lally Katz’s The Eisteddfod blurs the lines between reality and the illusory, melding the anxieties and experiences of her focal characters with her own perspectives and pains. The playwright introduces us to a unique and surreal world, and the focal characters through explicit narration, reminding the audience of her intentions before they are able to settle into the absurd suburban environment. 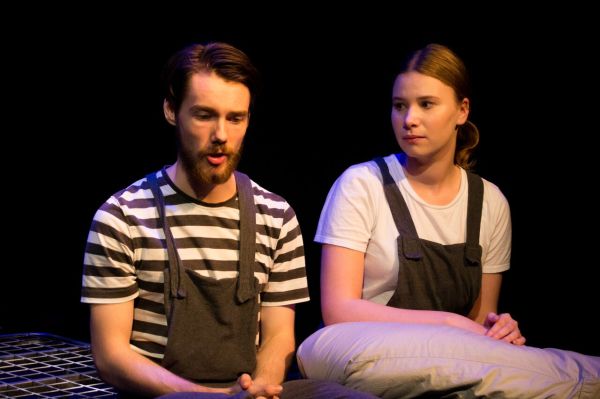 Katz’ characters Gerture (Maddison Kennedy-Tucker) and Abalone (Matthew James French) are introduced as traumatised and agoraphobic adult siblings who were orphaned some time ago after their parents were claimed in a gardening accident. Isolated and uncertain the siblings occupy their enclosed suburban home with only their uninviting furniture and vivid imaginations to keep themselves company. The siblings divide their time working between combined and separate surreal spaces, often resorting to seemingly continual and habitual routines within their isolation. While Gerture escapes to the back of the stage to act out teaching a class in her private space, Abalone occupies the downstage space that the siblings share, preparing for his upcoming annual Eisteddfod performance. When Gerture returns to Abalone, the two alternate between fighting sleep, fighting with one another, or fleeing into their psyches. They switch from individual explorations of personal imaginings to uniting during role-play of one another’s reimaginings of memories, anxieties or desired scenarios. The make-believe that Katz’ characters explore illustrates heightened sexuality, painful emotional battles, and a fusing of unreliable memory and developed obsession. As Abalone takes to a fixation on sharing his Eisteddfod performance of ‘Macbeth’ with his sister, Gerture either increasingly escapes back to her private classroom space or obsesses over her imaginary relationship with her emotionally abusive boyfriend Ian; played by her brother in an unsettling incestuous layering of roles. 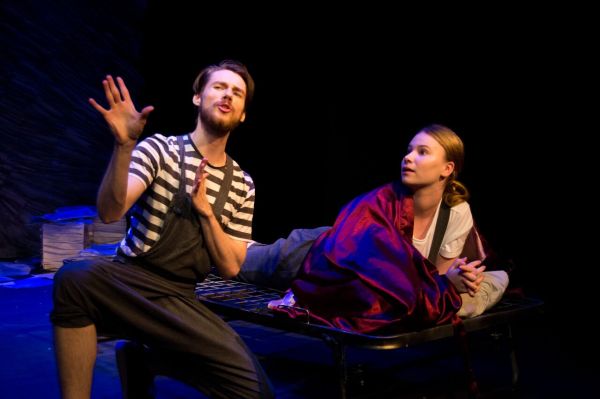 Katz has the siblings fragment from their traumatised and deeply unhappy lives as young adults into a multitude of other characters through role-play. The pair perform scenarios as “Mum” and “Dad”, damaged and detached lovers, and Shakespearean performers rehearsing their interpretations of Macbeth for the Eisteddfod. With multiple characters, relationship dynamics and distinctive scenarios, performers French and Kennedy-Tucker definitely have their work cut out for them. The duo have excellent command over their energy, mannerisms and conducts throughout their numerous roles. Kennedy-Tucker provides a powerful overall conduct as Gerture and her varied alternative roles as she agonises her way from one cornering frustration to the next. French skillfully combines vigor and desperation throughout Abalone’s frantic strains to uphold his world, his purpose and his connection with his sister. French and Kennedy-Tucker also provide natural and youthful energy to the play’s humorous moments, with an equally controlled vulnerability to their severe shifts in emotional unrest, and consistent chemistry that spans across the works’ numerous exchanges and imaginative realms. 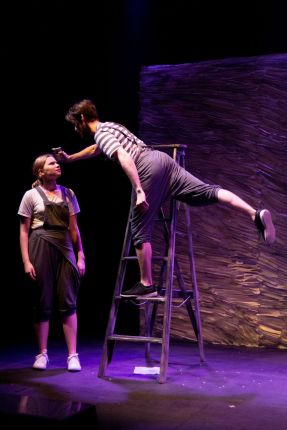 Surrounding the characters is Chelsea Jewell’s finely crafted production design. Jewell cleverly combines an uncomfortable suggestion of the generic suburban home with an imaginative fashioning of specific objects into functional and beautiful storytelling devices. The relatively realistic set elements consist of an uninviting wire bed frame with a dull pillow atop it, and a dark ladder that helps to indicate the line between Gerture and Abalone’s respective spaces. In addition to these uncanny objects, Jewell forms various pieces with a fragile paper themed design that gently alludes to the storytelling nature of the piece. While small plinths lined with scrunched white paper function as basic yet effective platforms for the characters to play with throughout their imaginings, Gerture’s upstage classroom space expands the paper design theme with a shambolic stack of unkempt paperwork and a textured backdrop made from dozens of additional scrolls of paper.

To accompany the simplistic yet effective production design, David Walters’ lighting creates rich and distinctive effects that interact with the textured set beautifully, but also distinctively overlay each moment to offer further visual depth. The lighting’s impact is particularly powerful when light is used to support moments where the audience is thrown into the characters’ vivacious imaginations. Walters uses a sharp stream of light to reinforce the significant line between the up and downstage zones that the siblings occupy. There is also lively play with intense flashes of colour and a delicate manipulation of light and shadow effects that combine to support the piece visually as it delves into the depth of the characters’ psyches. 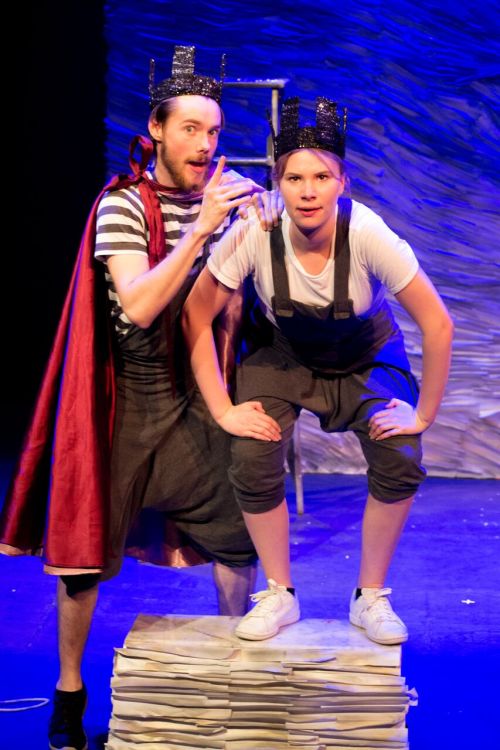 Director Heidi Manche brings a soft yet measured guidance to the layered themes and realms within Katz’s work. From the production’s beginning Manche clearly defines physical boundaries to the otherwise fluid temporal world. The play’s scenes and augmented moments are fused together with engaging energy and pace, made most effective when transitioning between each embodied memory and imaginary situation. Manche’s hold over the characters’ exchanges becomes particularly sharp when manipulating distinct mannerisms and physicality for each play of make-believe or exploration throughout the space.

Fifteen years on from the work’s successful beginnings, Room To Play’s production reinforces the universal nature of the works’ unsettling yet relevant themes of loss, pain, and human fears. With a timeless context and undeniably adaptable characters the production embraces the works’ potential for various forms of imaginative encapsulation.

Rhumer Diball is a freelance dramaturg and theatre reviewer based in Brisbane, Australia. Over the past five years she has worked as a Dramaturg for Brisbane and Melbourne based playwrights, theatre companies and festivals, as well as facilitating theatre workshops and working on audition and festival panels for various Brisbane theatre companies and organisations. Rhumer graduated from the University of Queensland with a Bachelor of Arts (Honours) with an Extended Major in Drama, writing her thesis on post-millennial playwriting methodologies in Australian Gothic theatre. She also reviews performing arts productions on her reviewer site https://downstagediscernments.wordpress.com. View all posts by RhumerDiballDramaturgy